Hare had raced off to find the wise animals as he had a special message for them. His eyes lit up with joy as he spotted them sitting having a rest by the side of the road, so he hopped over to them to tell them the news. he saw they had presents for the baby and even had a special carrot for him. He thought that was really nice of them. 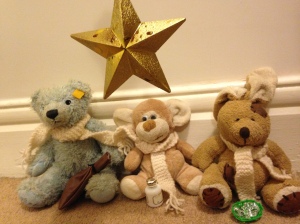 The three wise animals were making their way via a star sat nav which had floated down to show them the way to the new baby. Hare said he would lead the way…

Mean while back at the cave, the other animals had noticed the star telling everyone about the special monkey arrival.. 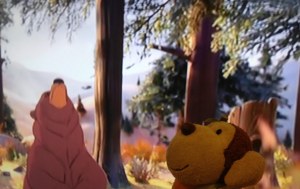 All the other animals saw the star and thought oooooh how shiny that is!

Millie Mary was getting a bit nervous now. When would the baby monkey arrive? Hare pointed at the clock he had put in Bear’s cave earlier and said – ‘See I knew this would come in handy. It’s time.’ 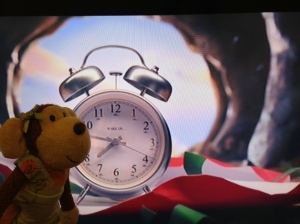 The clock told Millie Mary that it was time..

Within  a few minutes of the alarm clock ringing, the cave was getting full of all the animals who wanted to come and see the new baby monkey king- it was getting a bit crowded to be honest but Bear and Hare said at least it was nice and warm there. Monkey Joseph had built a crib ready from wood Bear had collected from the wood –

It was getting a bit full in the cave. Hugless Douglas turned up with all his friends so it soon got a bit cramped!

And then, low and behold, the monkey baby was about to be born….

Bear was ever so excited!

Bear could not wait to see the new monkey baby……