Millie here. I just had to write to you and tell you something really funny about monkey.

The day started out so well. Monkey was playing with the other half of his egg from yesterday. yes, i did say playing. remember yesterday when he was playing with his egg and putting it on his head as a hat? well the monkey madness continued:

Here is at playing the Monkey warrior as he called himself…..with his kinder bodysuit…….. 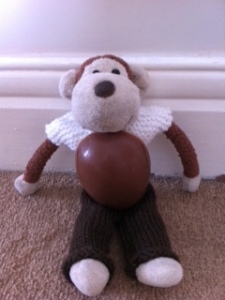 Then he got the great idea of using it as a kind of basket for our easter chicks……. think my monkey’s getting broody….bless

chicken in a kinder basket

Did you see Google’s home page today? well my monkey did. he was searching for pictures of poop and monkeys as he usually does at a weekend or on a holiday and guess what he found? a site that promised that you could search something and smell it on the screen.

Well monkey does this in his normal life as we monkeys find our way around the poop maze  (following dogs etc) and finding food and things every day, but as we are media monkeys, we are on the ipad and computer most days so monkey was OVER JOYED! i have never seen a monkey look so happy. 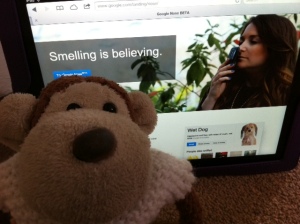 he saw the smell search engine on google and decided to have a go…..he sees the picture of the wet dog and his eyes light up! now he wont have to chase bernie the cocker spaniel from up the street! he loves how he smells and says he likes hanging on his tail and smelling dog essence but now someone clever at google has invented this site so monkey can smell dog bums from the comfort of  his own home! Genius Mr Google. Genius. 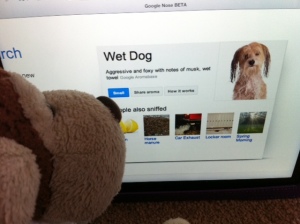 ooh i can almost smell the dog now

But then what did monkey find…..uh oh….

probably the best thin i have ever read on the web. Ever. Fact.

he wasnt so keen on the powder bit. thought it might smell a bit fresh and clean. But look! he shouted at me ( so i had to come see) Millie!! There is a place to smell poop on line!!!! At that point he fainted but he was soon back on his paws…. and then he saw the question…..what’s that smell? so…..

he tried to send his own smell, ‘monkey essence he called it, back to Google.

I didn’t have the heart to tell him. He’s still there now. Trying to smell more wet dog, and find more examples of poop, not just from babies but other monkeys, cats, anykind of poop really. He could be there for sometime. I hear some male animals like to watch football and their girls feel like ‘football widows’. Well that makes me a poop widow. And that makes me feel sad…..

ooh but i’ve just remembered there’s a choccie egg in the fridge with my name on it. and as monkey is still smelling and licking the screen, he could be there for some time……..

aah that must be what peace and quiet sound like?

If monkeys still there in an hour, I’ll go and tell him its a joke. Aah he just seems so happy though!

4 thoughts on “If Monkey ran Google – The Moogle search page”